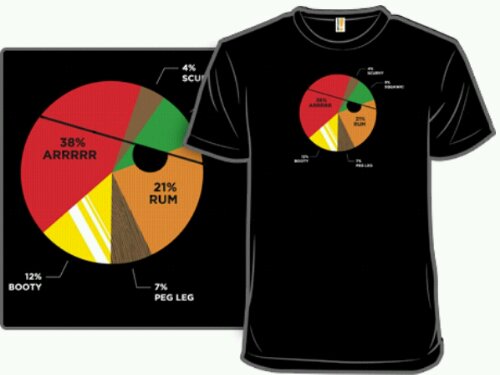 Woot’s daily t-shirts often amuse me, but until now I haven’t felt compelled to buy one. Lets count the reasons the Pie(Rate) Chart shirt is awesome, shall we?

If you’re still wondering what the punchline is, here you go. I love a geeky discussion thread even more than a geeky t-shirt.

From the shirt’s description:

“Well, ye blasted fool, did ye not notice that the circle has a great big patch in the center? Aye, lad, and that patch be coverin’ a missin’ 9%, most likely! And don’t ye be feelin’ foolish now?”

From a forum geek:

9% missing
“i” is the ninth letter
i = eye
Patch = to fill
therefore: eye patch fills in the missing value
It is a simple case of pirate math people

From the shirt’s creator:

haha, sorry the lack of 100 percent add-up has made some people jump overboard on this shirt’s purchase! There were actually two reasons/jokes we were going for here and both have been mentioned already:

As for some of the pie slices not matching up to their percentages perfectly, we felt melding the pie colors in a visually pleasing way was more important than aligning to the exact percentages. For instance, the red pie slice is supposed to vaguely look like a sideways pirate hat, as well as the peg leg placed around where the leg might be on a person, the squawk on the shoulder, and the booty…well, I won’t sink as low as our tee does on that front.

Thanks again for the love/indifference!