The key online holiday shopping days have been similar since the Internet went mainstream in the 90’s. What I find particularly interesting is the influence of mobile devices on retail search trends. Google recently released some interesting search data from last year’s (2011) holiday season: 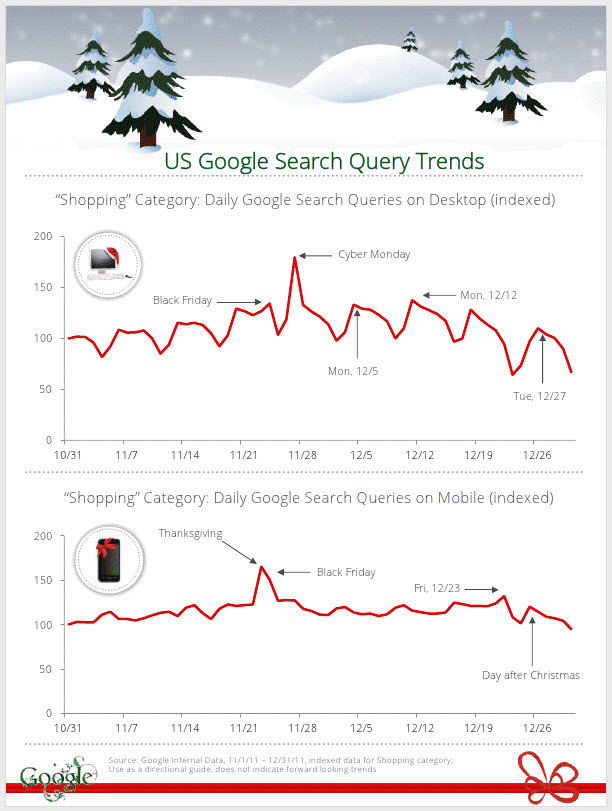 Other interesting Holiday 2011 shopping factoids released at the same time include:

See the full Holiday Quick Guide at Think with Google.

Excerpts from my latest article at Practical eCommerce: “Smartphones, Tablets Account for 1 in 8 Visits.”

One in eight pages accessed on the Internet in the U.S. today are viewed on mobile devices, according to a report by comScore. Mobile phones account for 9 percent of Internet visits and tablets make up another 4 percent. It begs the question: What sort of experience are those mobile users being served?

Mobile users are a demanding group. They want information tailored to their small screens that they can actually read and transact with, and they want it now. Strangeloop Networks provides optimization and web performance services for mainly enterprise-level companies. Its CEO, Jonathan Bixby, said, “The latest mobile user surveys tell us that two out of three mobile shoppers expect sites to load in four seconds or less.” Tablet users expect even greater load speed at three seconds per page.

Read the article in full at Practical eCommerce »

Super cute link bait infovideo from MDG Advertising about Pinterest. It’s a bit hard to read at times, but is painfully cute nonetheless.

The video format is interesting but I wonder if it would have gotten more shares as an infographic instead of a video? Or perhaps an HTML5 interactive piece where you could roll over different components and have the data zoom out to the foreground or the sizes of the elements change?

It would be very interesting to do a test of some sort to determine which format was the most effective. But I can’t think of a way to format such a test. If you do it sequentially — first video then static then HTML5 — you risk the latter formats getting less buzz based on saturation of the information from the previous formats. But if you release them simultaneously on different social platforms — say YouTube for video, Pinterest for static and Facebook for HTML5 — you obviously risk the biases introduced by the size of the audiences there.

I suppose you could always do standard A/B testing of the format on your own site, but the most interesting thing is what happens to the information off your site. Where and how it’s shared. Which formats have stronger reach on which social networks. You can make suppositions but what if the data surprised us? What if the sheer volume of Facebook users wiped the floor with YouTube sharing? And would that change if the primary home of the video was a blog post on your site that embedded the YouTube video rather than sending traffic to Facebook or YouTube itself to see the video? So many interesting questions. Too bad I’m an SEO and not a data analyst.

Thanks to Melissa Fach over at SEJ for the post idea.

Excerpted from my latest article at Practical Ecommerce, read it in full here. 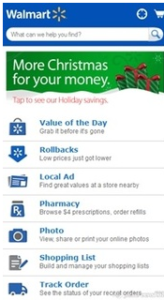 Google’s mobile crawler Googlebot-Mobile has traditionally focused on content designed for feature phones and their extremely limited browsers. Google recently announced, however, a new version of Googlebot-Mobile that crawls using an iPhone user agent, enabling it to discover content designed for smartphones, which are more robust than feature phones.

As an avid searcher and a search engine optimization professional, I’ve been disappointed in Google’s treatment of smartphone search results — I addressed here a few months ago, in “Google Says Smartphone Sites Aren’t Mobile.” When a searcher takes the time to tap in a query on their smartphone’s keyboard, the search engine should reward that searcher’s effort by favoring smartphone content over desktop content. Instead, Google has left the task to each individual site to detect smartphones and serve the appropriately formatted content — with mixed results.

Read on to see how one major retailer flubs smartphone usability and potentially misses out on mobile search sales.

My latest article at Practical Ecommerce, read it in full here.

How etailers manage their social media marketing channel has a growing impact on organic search results. Google and Bing have both incorporated social data into their algorithms to signal content freshness and quality. While the datasets each engine has access to differ, the fact remains that search marketing and social media cannot be managed in silos.

According to the presentation given by Andrea Fishman, vice president of global strategy at BGT Partners — a marketing and design firm — at Search Engine Strategies Chicago 2011, “57% of digital marketing impact is derived from SEO.” But search engine optimization also has a symbiotic relationship with social media, press relations, paid search, offline advertising, and other marketing channels.